We worked this project towards the goal: Win the Business Professionals of America Software Engineering Team National Competition (BPA SET Competition).
​
...and we were successful! 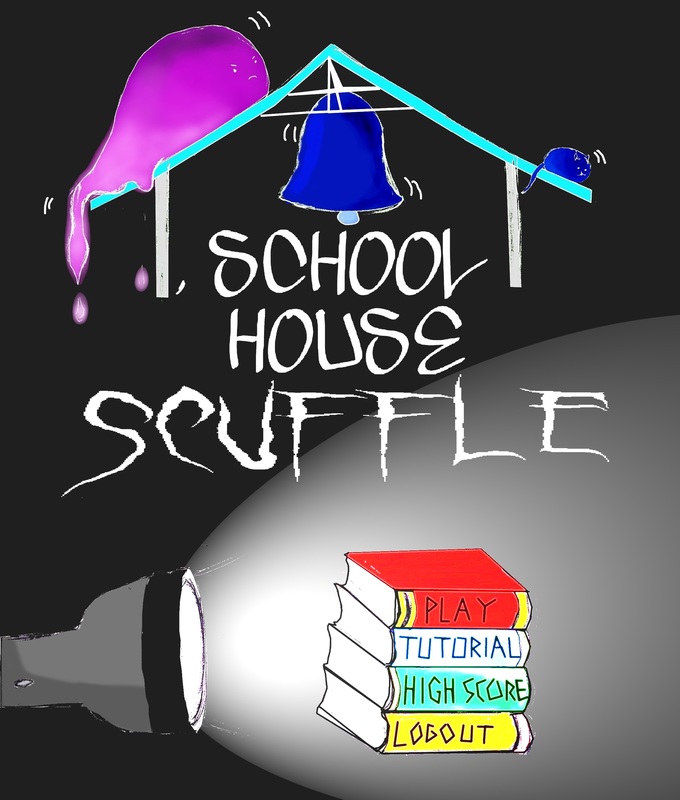 We got the rubric and requirements on September 20th, 2012:​

​Purpose
The purpose of the project is to create a retro-inspired 8-bit turn based strategy game. The project is being sponsored by BlitBit Interactive, a digital entertainment media publisher based in Austin, TX. BlitBit is sponsoring the project as part of their retro-inspired “Project Wayback” branding initiative. A component of our game is the creation of the character, enemy, and weapon classes in order to keep track of items and units on the map.

Project Overview/Requirements
In order to meet most, if not all, the requirements, we will make sure we create classes such as character, enemy, weapon in order to keep track of items and units on the map. This is the basis of our game and needs to be one of the first things to be completed to produce a fully functional 8-bit strategy game. Creation of these classes will be aided through the production of a detailed UML Class diagram. Careful diagramming and organization of our code will help facilitate the creation of these classes. Graphics in 8 bit style are another one of the key things that must be completed. In addition, we would include original music to aid in the aesthetic elements of the game. Lastly, a data base would be created to store game saves, username, passwords, and high scores.

Team Organization
The people ensuring success will be Alan Chen, Daniel He, Isaac Chang, and Amanda Zhao. Their job titles are team leader, lead programmer, graphics designer, and documentation manager respectively. Over view of job responsibilities for each title:
Team LeaderLead ProgrammerGraphics DesignerDocumentation Manager
Quality Management
Coordination between the graphics designer and the lead programmer will ensure cohesion between the necessary graphics and music elements with the code that utilizes such resources. This will help prevent glitches and other unanticipated mistakes in the game code. In the final production of the game, the visible images of the map, task bar, and the player view will be reviewed along with the appropriate sounds and background music by the entire team to ensure a variety of opinions to reach a consensus on the optimal state of the game.

It is essential to track changes in documentation and code in order to ensure we are keeping up with our deadlines and track the level of completion of various tasks assigned to team members. This will be achieved by dating all items in the code with the time at which they were completed in the commenting, which also aids in communication and allows other team members to stay up to date with the times at which various components of the game have been completed and when they should be completed. Also, changes will be communicated through email and through the creation of multiple updated drafts of items like timeline and title pages, where new changes will be detailed through comments and notes. All drafts will be stored in our project folder in our Google Documents drive where all versions (updated versions and drafts) will be stored and accessible in order to see changes.

Communications Management
Proper communications are essential to a functional team project. A project folder was created by our team leader where we can share all our team files, allowing all of us to edit our project work simultaneously. This project folder is accessible to all team members and contains separate sections where we can share code, game function descriptions, timeline drafts, and other essential documentation necessary for proper communication between our group members. Most of our team is also in the independent study computer science class, where they are able to confer and work on different aspects together in order to keep everyone on the same page, help each other complete tasks, and distribute duties completed by each team member. All team members frequently meet after school to work on documentation, coding, and other necessary items for the project, which allows every team member to stay up to date with changes in code and progress of the game. Team members also stay in contact with emails, meeting during classes, meeting afterschool to staying in contact. This ensures the smooth functioning of our team.

Detailed Functions
An accident occurred in the chemistry lab: Everyone in the school is evacuated except the player. The player is trapped inside. There are chemistry monsters everywhere; the player needs to get out as soon as possible.

The primary goal of the game is to get out of the school without dying. While in the process of getting out of the school, there are different tasks to do. First, the player needs to go to the electricity control center to turn on the lights in the whole school. Next then the player will need to find possible weapons as shown on the map to fight different chemistry monsters because they’re guarding paths to possible exits. Once the player successfully exits with a key without dying, the player has completed the game.

Different objects and enemies are in the game. Most, if not all, enemies are chemistry monsters. They damage the player if the player touches the enemy or its weapons. Chemistry monsters’ weapons could be anything—flying particles, moving structures extended from the main body etc. Other than enemies, there are also weapons for the player to pick up along the way of his/her adventure—tennis rackets, staplers… etc. These weapons damage the chemistry monsters if the weapon touches the monster. There is also a key to open the front exit after you have beaten the “boss” of the game.

As part of the project plan, we came up with a schedule of deadlines for major checkpoints for our project. This ensured that we use our time efficiently and that we are able to finish the entire project in time for submission.
​
Timeline for documentation:
​Timeline for game:

Also as part of the project plan, we chose the water fall cycle because it closely fits the project we are required to do. It gave us the freedom to edit or modify any part of the cycle if there is a change in the requirement or design. 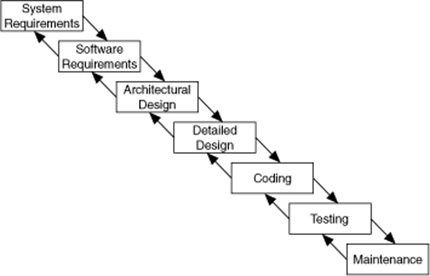 Based on the "detailed functions" in our project plan, we created a short story line for the game and sketched a storyboard. The story goes like this: ​*note: it is a tennis racket in the original storyboard, because when we drew this, we still haven't decided what weapon(s) the player is going to use to defend against enemies. 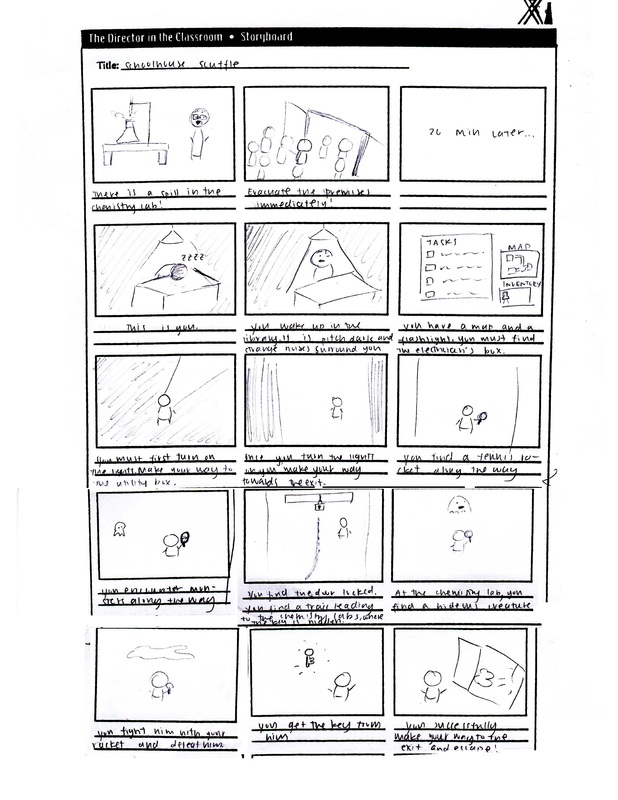 This should be self explanatory. 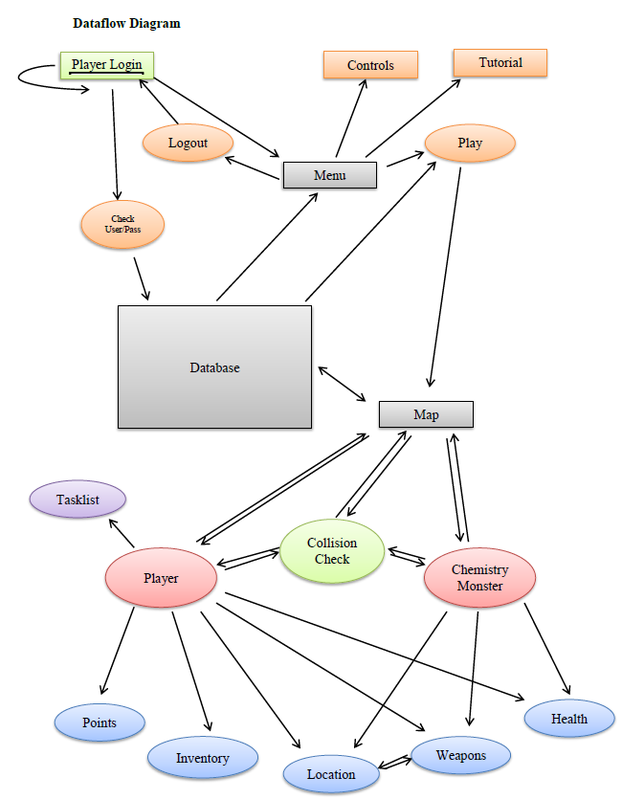 The next thing we did was the map! We chose to hand draw our entire map so we can put details in that we cannot hope to include using a code generated one like Coffee Wars. The map started out simple, but we added more details as we moved on:
You may be wondering, if the map is hand-drawn, how did we make the sprites interact with the map? We had an easy solution: make the game tile based, and make a copy of the map using a 2D array. The way we send the 2D array data into the program is by a text file: 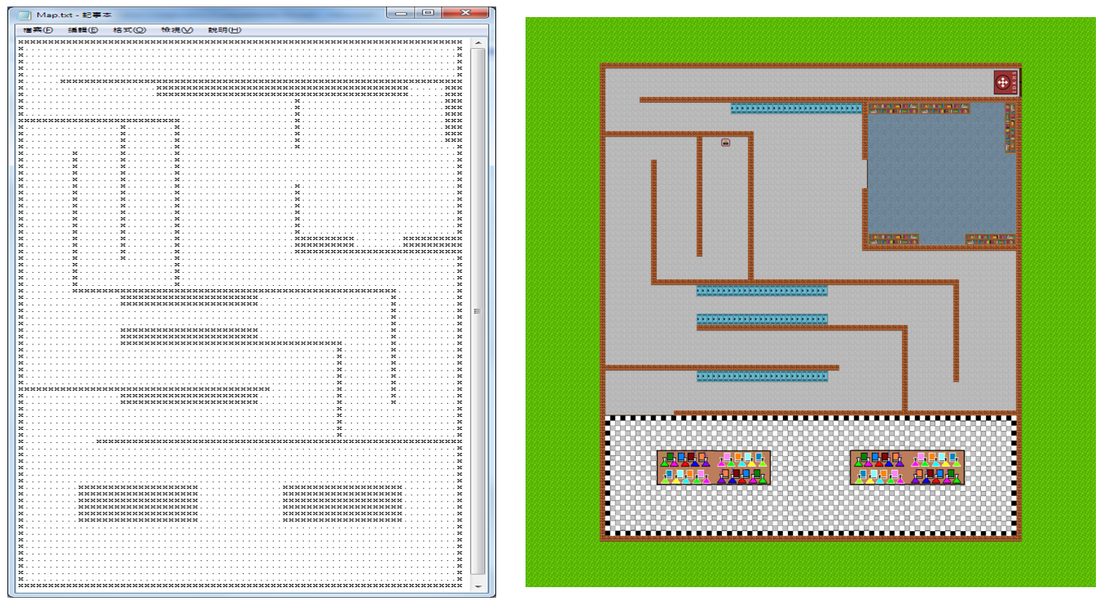 Main sprites from the game:

The player and the slime sprites have 8 different directions each. In addition, the player has 3 separate different sprites: one for holding a flashlight, another for a weapon, and finally one holding nothing.

I wrote the game play music myself. The cues are originally for full orchestra, but switching it to 8-bit sounding instruments, I got it to fit fit the mood of an 8-bit game. 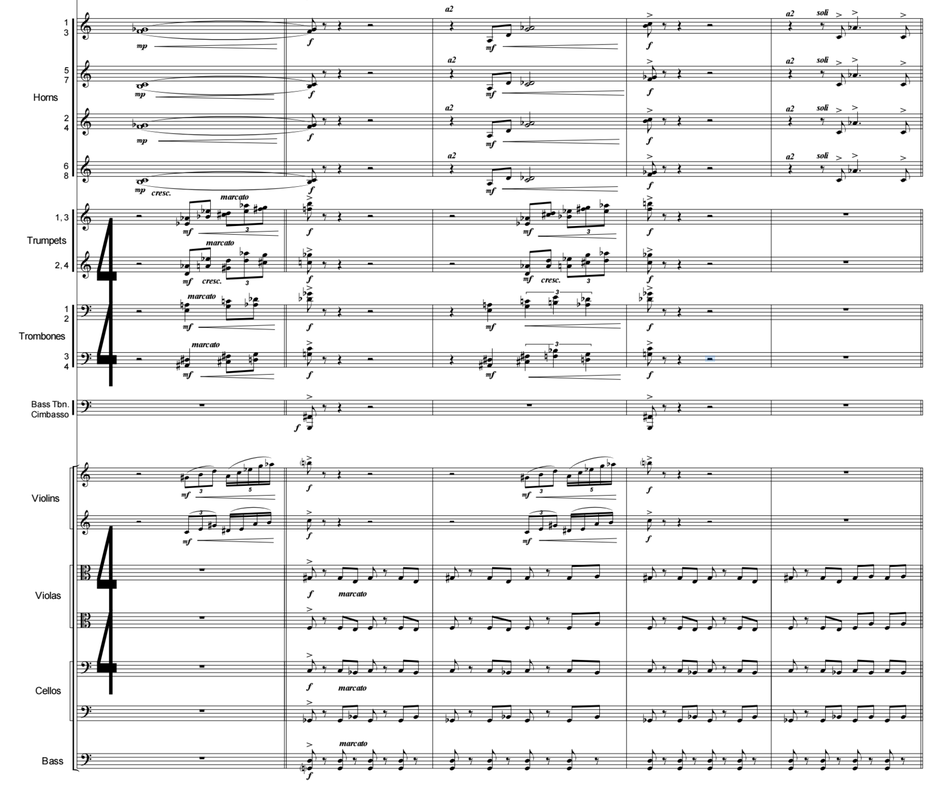 Coding went very smoothly because of all the preparation beforehand (everything you see above). I'd say the most interesting part to code was sprite collision with other sprites and with the map. Coding to spot a collision is an easy task especially when all the sprites are square and the same size; however, limiting their movement because of collisions became a rather complicated task...

For example: In the game, all enemies will chase the player through the path of least resistance (move towards the direction of the player...etc.), so if there're multiple enemies on screen at once around the same area, they'll almost certainly end up being exactly on top of each other when they comes near the player. This is especially problematic whenever there're large amount of enemies on screen, because they eventually end up looking like one sprite, but really there might be 10 on top of each other.

There is an incredibly easy fix to this: making the enemy movements random. The drawback to this is the enemies would become "less smart", since now they'll almost certainly just move and jiggle randomly on the screen.

I eventually coded collision between all the sprites, while keeping the chasing algorithm. This is not as easy to do, because you'd have to check for all possible combinations of each pair of sprites that might collide. Stopping when they collide is trivial, but for them to be able to get themselves unstuck after colliding is not so trivial anymore... Eventually I did get it working, by "cheating" (you'll see what I mean below). Anyway, here's an early screenshot of the game showing enemy collision in the early stages: 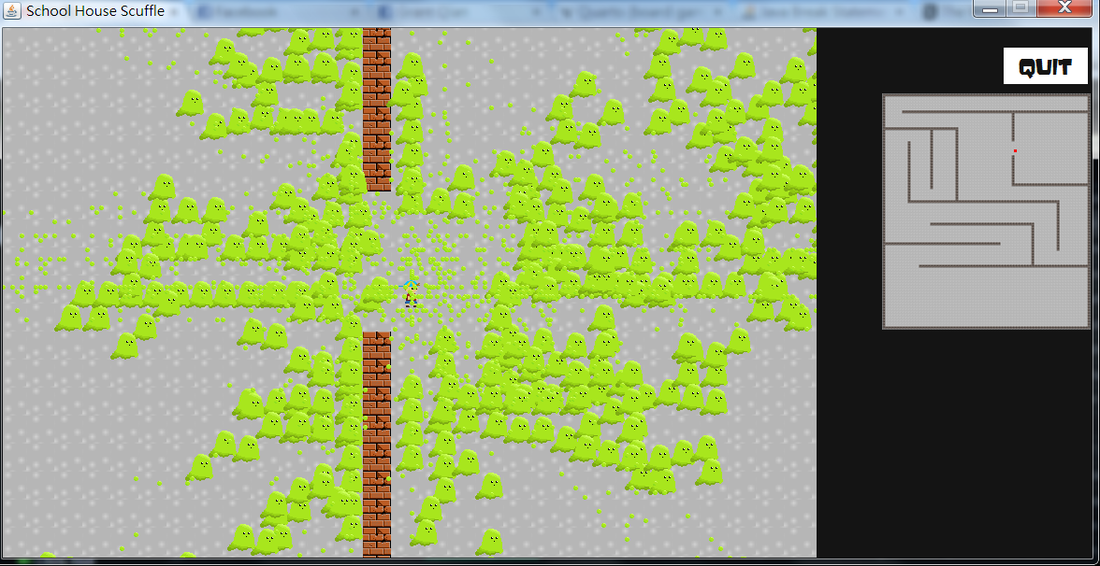 By "cheating" I mean instead of checking collision between every single sprite, I only checked collisions between half of them at random. There're two advantages to this: This is what I call a win-win implementation.

I won't spend too much time dedicated to how I coded this, I'm sure seeing the actual game in action is more interesting.

Here is basically a watered-down version of our presentation for the game:
If a user clicks Play, a dialog box would appear asking the user if he/she want to load previously saved games if saved data for the user exists. Once all the data is loaded, the game screen appears, as shown. The screen contains the game-play area (point), score, health bar, status/task bar, and a small guide map which shows you where your character is currently on the map.
Now let’s get into the actual game. Here is a list of tasks the player has to accomplish before completing and eventually winning the game. These tasks are given to you by friendly cat NPC when you come in contact with it. The movement of the player is controlled with arrow keys. Shooting attack is controlled with space bar; Spraying attack is controlled with “v” key; Items, such as new weapons, the key, are acquired through the completion of objectives.

The boss is found only in the chemistry lab, and he has the key. He has higher health and unrestricted movement. He can attack the player in addition to being able to reproduce slimes around him.
Once you beat the boss and move to the front door, you’ve beaten the game. Once the game is beaten, I can enter my name and store my achievement in the high score list.
But if your health reaches zero and die along the way..... 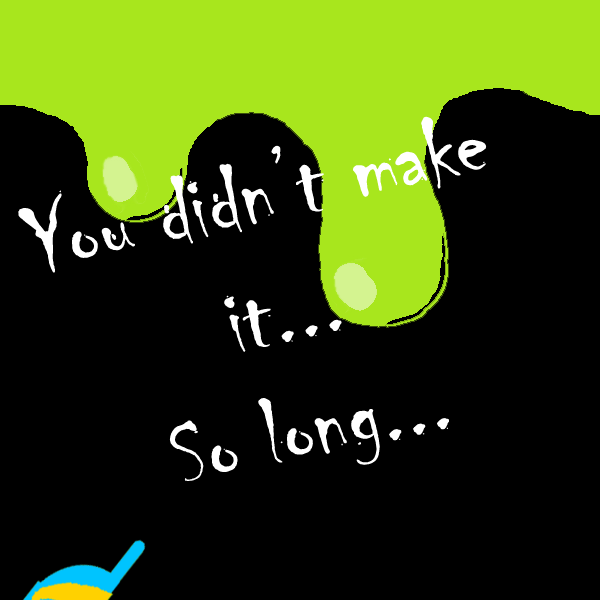